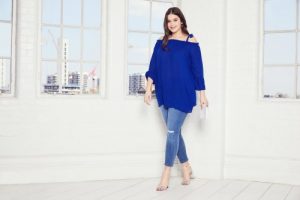 A new fuller figure convention was a sell-out at New York Fashion Week this season, so why isn’t London following suit? Gina Jones argues the case…

It’s London Fashion Week, which means out with the old and in with the new, but one thing that looks unlikely to change this year is the size of clothing shown on the catwalks. Every year we are bombarded with images of the latest looks – an endless carousel of creativity and innovation which marks London out from the other international fashion weeks – but what we never seem to get is diversity when it comes to size. The models are unfailingly tall, thin and barely out of their teens. The message is clear: you can be androgynous, you can be unusual looking, but what you can’t be is anything over a size 10.

Perhaps it’s time that London took a leaf out of New York’s book, where for the third year in a row, an event took place celebrating sizes outside the usual narrow confines of the catwalk. TheCurvyCon is a two-day conference showcasing styles for women of all sizes. The sell-out event was founded by curvy bloggers and influencers Chastity Garner and CeCe Olisa and featured a keynote address from Emmy nominated actress Chrissy Metz. It featured a catwalk show with looks from plus size retailers, pop up shops featuring well-known brands that cater to a wide variety of sizes and Q&A panels with online influencers.

The event has so far been a huge success, with Garner saying it will triple in size next year, from 500 to 1,500 attendees and move to a much bigger venue to accommodate the burgeoning demand. It’s clear that women of all sizes are interested in fashion and, what’s more, are willing to spend money on it, so why is it taking the industry so long to catch up with this?

It seems the message is starting to spread, slowly. We were delighted to hear that there was an amazing fuller figure centric event in Liverpool, The Curve Fashion Festival, sponsored by New Look on 9 September. It’s the largest one of its kind in the country and featured catwalk shows, celebrity talks and much more. But why must it exist in a vacuum, away from all the action in London? Shouldn’t London Fashion Week be a celebration of everything happening in fashion in this amazing, slightly bonkers city? Surely all the stylish fuller figured girls can’t just be up north?

London has historically had a reputation for being ahead of the curve and slightly more innovative than other fashion weeks, but it seems when it comes to celebrating women’s bodies in all their wonderful shapes and sizes, it’s still stuck in the dark ages.

Do you think it’s time for London Fashion Week to introduce fuller figured fashion? Tweet us @TheimageConsCo with your opinion.

This article was written by our guest writer, who does not work for The Image Consulting Company and all views are her own rather than those of the company.