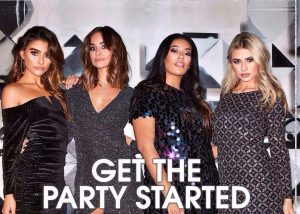 British women spend £91.50 on average on their festive party look – and yes, that includes the shoes!

It seems that us Brits are excellent at snapping up bargains, if the latest stats from high street retailer Quiz Clothing are to be believed. Their recent survey revealed that most women are able to sort their entire festive party outfit for under £100 – which is a mean feat when you consider that some of the little numbers we’ve had our eye on in Whistles start at £120…

It is, of course, entirely possible to source your whole look from affordable high street stores and it sounds like most people are really good at it; 40% of women spend less than £29 on shoes, while 32% spend between £1 and £14 on makeup and accessories – including handbags and jewellery.

Interestingly, there are regional variations. Women in the West of England are the biggest shoppers, with 100% of those surveyed planning to buy a new outfit for their Christmas party. (Ahem, we could have told you that!) Just over the bridge in Wales, however, women are a bit more frugal, with most saying they will re-wear an outfit they already have, and only 7% buying something new.

There are also differences between age groups, with 14-17 year olds being the most likely to buy a new outfit (50%), followed by 23% of 24-34 year olds, and only 13% of 55+ women forking out for something new. This is no surprise to us though, since mature women are more likely to already know what works for them and tend to shop less, but spend more on higher quality items when they do buy something new.

It all makes for fascinating reading though and makes us wonder exactly what will be in everyone’s party wardrobes this season. Will everyone be splashing out on this season’s must-have LRD (little red dress), or perhaps something sparkly? Or will we continue to rely on our tried and trusted black numbers to ensure we get the wear out of it in the year to come?

Tweet us @theimageconsco and let us know what you’ll be wearing this party season!