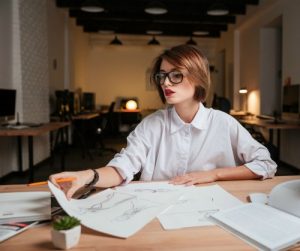 Are staff dress codes for the greater good or is it workplace control freakery at its worst? Gina Jones is conflicted.

The BBC recently came under fire for introducing a strict dress code for staff which included banning skirts above the knee, cardigans and items from Marks & Spencer. It sparked furious debate online between those who agreed with their stance and others who believe the policing of people’s clothing choices is nothing short of a fashion dictatorship. Personally, I don’t find a nice Per Una cardi especially offensive, but I am curious as to why employers feel the need to meddle in people’s wardrobes in this way.

To be fair, the BBC aren’t only ones to enforce their own style prejudices on people who work for them. Airlines, hospitality companies, legal firms and even publishers (whatever happened to creative thinking, guys?) – there doesn’t seem to be an industry that doesn’t have some kind of rule about what women can and can’t wear. I say women because, in most cases, it’s women’s bodies that are being policed in this way, not men. Heel height, make up, hair length, skirt length – by controlling the way women wear these things, companies are in effect exerting control over their bodies, their sexuality and their freedom of expression. As well as affecting their appearance, dress codes can actually impede women’s freedoms in other ways.

As an events manager, Rita Andrews is accustomed to dressing up for work, although comfortable shoes are often a must when you’re on your feet all day. In a previous role at a publishing company, however, all women were required to wear heels, she says. “It was crippling as we couldn’t walk into town to get lunch. The company HQ was on a canal path, so basically the dress code meant that the women couldn’t go out for lunch, at least not without destroying their feet, anyway! How ridiculous is that? The rule was probably written in the 1950s, and in my opinion it should have stayed there”.

In retail, the rules are often strictly policed. Meg Pope used to work for a well-known department store with a particularly draconian approach; “Every new employee is given a handbook when they start which details their dress code. It includes rules like ‘hair must be a naturally occurring colour’ and ‘make up must be natural and understated’. I almost got sent home for wearing red lipstick. The worst part is that they are nowhere near as strict on the men – it’s almost all focused on the women. It’s a bit like being in a cult”.

While I personally think red lipstick looks totally chic and actually makes me feel more professional and in control, I can see why certain retailers are so concerned about what staff are wearing. Your appearance carries power – it can communicate to others who you are (or perhaps who you want them to see) without saying a word. If the message is overtly sexualised, does that suggest that the person isn’t focused on the job in hand? If your team are all giving different messages to each other, does that provide an inconsistent image of the company to its customers? Possibly.

Fiona Lafon, now a self-employed florist at Emerald & Jade now works mostly in jeans and trainers, but in her previous career at a law firm, the rules were very different; “While I was at the firm they brought in a policy stating exactly what people could and couldn’t wear, down the types of clothing, preferred colours and everything. They went into so much detail. At first we laughed it off, but they were serious.

“I get why they did it – there were some people who would rock up to work in a boob tube. I guess it’s one of those things where some people are so out of line, it’s easier to bring in a blanket policy for everyone rather than singling them out. To be fair, it applied to both men and women, so it’s not like they singled out the females”.

A dress code can actually bring everyone together, and make sure that everyone is singing from the same hymn sheet. At the same time, people hire people – not robots. By making everyone look the same, are you stripping away their individuality? I think the answer lies somewhere in the middle. Encouraging staff to dress professionally is probably a good idea, but the rules should apply to everyone – men and women – and shouldn’t be so draconian that everyone ends up looking like clones. Individual flare and personality is something that should be treasured and encouraged. It’s the personalities and characters who make a workplace what it is, after all. I especially want to meet the lawyer who wore a boob tube to work. She sounds like fun.

Do you think workplace dress codes are a good idea, or should they be banished to fashion room 101? Tweet us @TheimageConsCo with your opinion.

This article was written by our guest writer, who does not work for The Image Consulting Company and all views are her own rather than those of the company.